Due to the excess demand for quality real estate and until recently, relatively low interest rates, investors were willing to move up the risk curve in 2021 and the first part of 2022 in the search of higher yields by acquiring real estate in a future state of development ("forward deals"). Notwithstanding these favourable conditions, the real estate funding market has felt the effects of COVID-19, building material and labour shortages, raging inflation and rapidly increasing interest rates. It remains to be seen whether and how these rapidly evolving parameters will impact the nascent forward funding market. This article discusses the main considerations when considering and structuring forward deals.

Structure – asset deal. In a forward funding scheme via asset deal, the promoter transfers the ownership of the land (usually under the condition precedent of planning permission) to the investor whereas the risks related to the property and the related costs and taxes only transfer once the property is completed. On the date that the land is transferred, the investor will usually pay the value of the land and the works already realised thereon (if any). The transfer agreement will contain various provisions on the development and funding of the project (the sale and development agreement or SDA). In the SDA the promoter commits to deliver the agreed and permitted development within a certain budget and timeframe; the investor commits to fund the development. Throughout the development period, the investor will provide funding (usually up to a capped amount). Parties typically agree that the investor will acquire ownership progressively. Each time a tranche is paid for works, the corresponding ownership over such works is acquired. Some investors will require a percentage coupon (cf. infra) on the amounts advanced to the promoter until the date of provisional acceptance or any other milestone date agreed between the parties (for example, when a certain occupancy level is reached). As the investor funds the works, external debt (if any) is being entered into at the level of the investor. To shift the risks for the promoter onto the general contractor, the promoter will need to ensure that the requirements related to the works agreed in the SDA and/or the lease agreement (in case of pre-letting) are as much as possible mirrored in the underlying agreements with the construction team (ie. construction agreement, architect agreement, etc.). The investor will usually require a direct agreement providing step-in and cure rights into the agreements with the construction team. The external debt provider of the investor will also require a similar direct agreement to step into the agreements with the construction team and into the SDA.

Share price. The price for the shares is usually calculated first on the transfer date of the shares based on closing accounts of the target company (the "transfer date") and is then recalculated on the date of provisional acceptance (or, in some cases, at the time that the property is let according to pre-agreed occupation levels) (the "handover date").

The standard formula to calculate the share price on the transfer date is the following:

In most cases, the share price will be recalculated on the handover date using the same NAV as at the transfer date, but whereby the AVP is replaced by the pre-agreed value of the fully developed (and let) property and whereby the BVP is replaced by an adjusted book value which, among others, comprises the BVP at the transfer date and all development costs (a concept that is to be carefully defined in the documentation) incurred by the target company until the transfer date. In addition, the DTL will be recalculated using the AVP at transfer date and the adjusted BVP. Some investors will require a price reduction (usually in the form of a notionally compounded interest) for the funds they have advanced via the target company or directly to the promoter.

A typical forward funding deal can be schematically visualised as follows (click here to view a larger image): 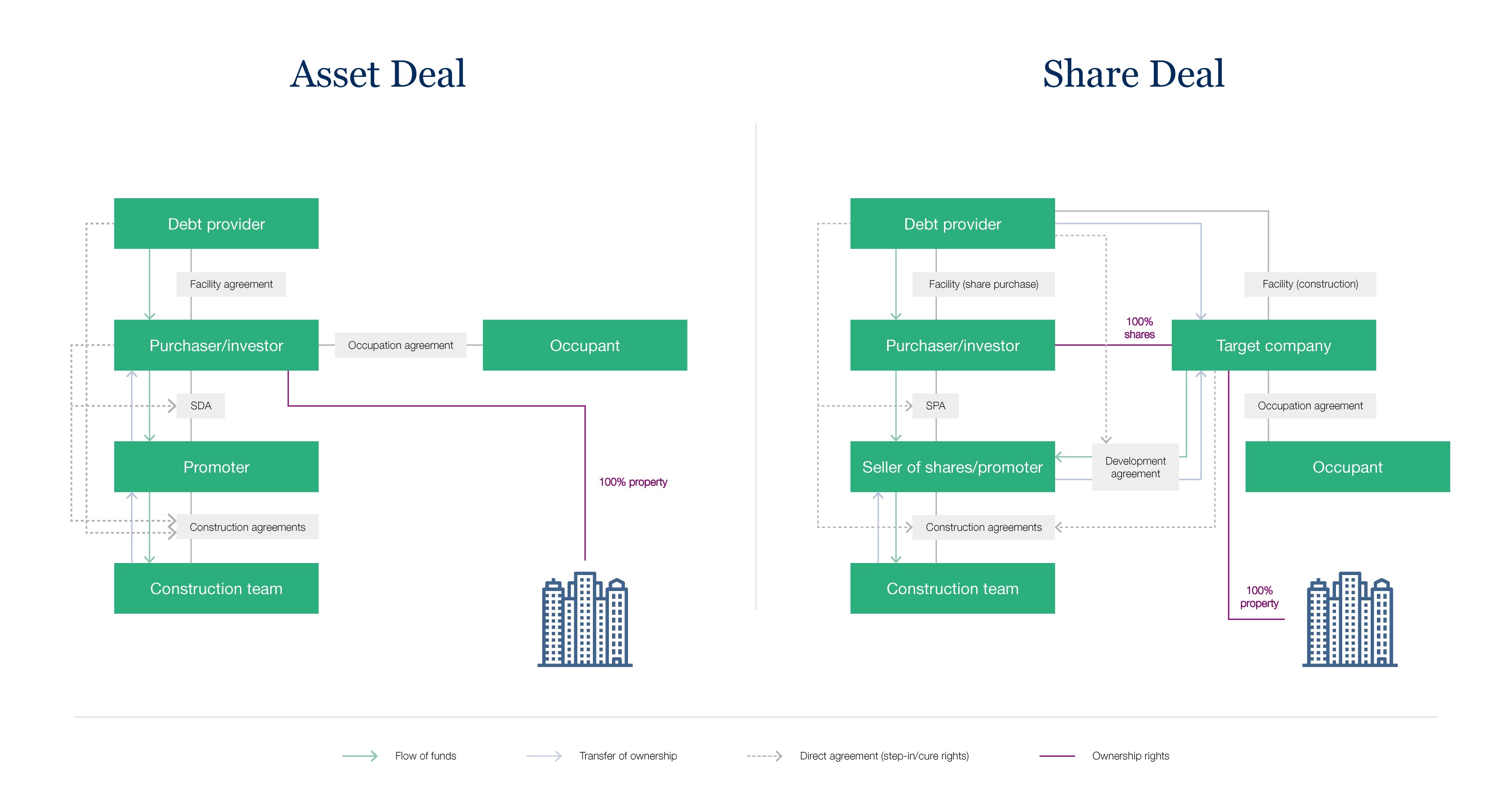 Benefits. The benefits of forward funding for the investor and the promoter are, among others, the following:

Considerations. Although a forward funding scheme can have considerable benefits for both the promoter and the investor, it usually entails more complex agreements, requires sufficient (economic) incentives for the promoter to remain on board until the end, and requires a more extensive due diligence exercise compared to a traditional acquisition (ie. before the transfer date and before the handover date). In addition, forward funding schemes come with particular tax considerations (e.g. relating to the pricing of the development services versus the asset/share price as both may have different tax consequences), a risk of margin deterioration in case of delays and/or cost increases and usually one should consider higher advisory and transaction costs for this type of transaction. Due to the higher overall set-up costs, investors usually only engage in forward funding schemes for larger developments.

Qualification: sale or development. An item of particular attention is the qualification given to the SDA and the development agreement respectively. In the absence of an accurate qualification, the agreement will either qualify as a sales agreement (contrat de vente / verkoopovereenkomst) or as a construction agreement (contrat d'entreprise / aannemingsovereenkomst). The involvement of the investor in the design, conception and control of the execution will, among others, play a role in determining the qualification. The question related to the qualification is important since the rules applicable to each contract type differ noticeably. The following topics, for example, are treated differently depending on the type of contract: the liability for defects (ie. warranty for hidden defects and decennial liability) as well as the possibility to limit or exclude liability for such defects, the moment on which ownership and risks are transferred, the interest on arrears, the liens the seller or developer has on the property, the possibility to unilaterally terminate the agreement and the possibility of direct claims granted to the investor and subcontractors under each contract type.

Risk of cost overruns and safety valves for investors. Both the promoter, and ultimately the investor, will be concerned to control any cost overruns (ie. expenses exceeding the agreed projected cost schedule), as both will be exposed if the project becomes unprofitable for the promoter, or worse, if the latter becomes insolvent. Such risks can, among others, be reduced by building in one or more of the following safety valves:

Risk of non-funding. In turn, the promoter must retain confidence in the investor's continued ability to fund the development (eg. sufficient solvability and liquidity) and contractual protection mechanisms should be carefully agreed in case of a funding default by the investor. There are various options available to cater for this, ranging from a specific security to agreeing tailored mechanisms to deal with a funding default.

Risk of non-alignment. Accurately defining and aligning the various agreements (lease agreement, SDA or development agreement, construction agreement, facility agreement, etc.) is absolutely key and requires careful drafting. If agreements are already entered into with tenants, for example, cohesion should be ensured between the lease agreements (and potential possibilities for the tenant to request variations), the SDA or development agreement and the construction agreement. If not, there is a risk, among others, of non-compliance between the built-to-suit lease agreement and the building as developed. This can lead to rent reductions, or worse, the tenant being allowed to terminate the lease resulting in vacant units. Drafting and aligning the acceptance and dispute procedures to resolve (technical) conflicts which bind all involved stakeholders (investor, promoter and construction team, etc.) is often also an area that is given insufficient attention in practice, resulting in complex and multi-jurisdictional parallel disputes which can have different outcomes.

Residential assets. Belgian law does not regulate forward funding structures as a whole, except when a promoter wants to sell units for residential use before the construction is completed in a habitable state and upfront payments are required. Such forward funding schemes are regulated by the compulsory Breyne Act of 9 July 1971 which contains multiple provisions aiming to protect the private individual's investment. The first step in setting up a forward funding relating to residential assets must therefore always be to verify whether the Breyne Act applies to avoid potentially null and void agreements.

Structure. A forward commitment or forward purchase transaction is less complex. In such structure the investor pays the purchase price (usually fixed, but recently alternative pricing mechanisms have been seen on the market) and acquires ownership of the land and constructions once the project is completed (usually at the time of provisional acceptance of the building). In some cases a limited deposit or reservation fee is paid by the investor which is only due to the promoter in case the investor defaults under the agreement. The key difference is that the investor only pays for and acquires the completed project at the end of the construction, requiring the promoter to finance the project.

Benefits. The benefits of forward commitment for the investor and the promoter are, among others, the following:

Considerations. In a forward commitment scheme the investor will have less control and oversight over the end product and fewer possibilities to take action in case the project or the promoter encounters problems. From a promoter's perspective, there is the risk of margin compression (if the price is locked in at the profit side with the investor but not at the cost side with the construction team), development finance is still required, and longstop dates and delay penalties may affect the promoter's margin in case of (substantial) delays on site (as it is the case in a forward funding scheme). As a promoter, an investor's financial strength over time should also be assessed ensuring the necessary funds will be available once the project is developed and the price is due and payable.

Drafting considerations. In a forward commitment the right balance must be found during the development period between giving sufficient flexibility to the promoter to complete the project and giving sufficient monitoring and approval rights to the investor. Equally, as is the case in a forward funding structures, the parties should clearly define the constructions that must be developed and as well as all conditions precedent that must be satisfied before the agreement comes into force (eg. conditions that must be met to grant provisional acceptance, deliverables to be provided, planning conditions, etc.). Due consideration must be given to the various guarantees that must be granted, when the price is payable and what triggers the transfer of ownership and risks.

Unless market conditions substantially change in the coming months, forward deals remain attractive alternatives for both investors and promoters to structure their real estate transfers with the view to maximising their returns. In situations where promoters have a limited track record in delivering on time, do not have a sufficiently robust balance sheet or due to uncertainty on the market, forward commitments may be favoured over forward funding. In the absence of such concerns, forward funding structures may be favoured for their overall higher returns for both sides of the table. A proper understanding of the underlying economics and well drafted agreements should provide the necessary comfort that (i) both parties remain incentivised to deliver a high-quality product on time and on budget and (ii) potential risks (insolvency, construction risks, etc.) are mitigated to an acceptable level. Parties and their advisors that fully understand the economic, legal and tax implications of these complex structures in any case have a head start over their competitors during the bidding stage, this without necessarily compromising returns.

Note. This article does not necessarily deal with every important topic or cover every aspect of forward deals and it is not designed to provide legal or other advice.

Stay current with our latest insights