RReport of advisory committee on taxation of multinationals in the Netherlands

Article
EU Law
Expertise
Tax
On 5 June 2019, the Dutch Lower House of Parliament adopted a motion that called on the Government to initiate and set up a committee of experts (‘the Committee’) with the purpose to investigate measures that would make the taxation of profits of multinationals fairer, while the Netherlands would remain attractive for Dutch head offices. Last Wednesday (15 April 2020), the Dutch State Secretary of Finance sent the report of the Committee to the Dutch Lower House of Parliament.
Image

The Committee has identified several areas that can contribute to an ‘unbalanced’ payment of taxes by multinationals. The Committee’s advice is threefold. The Committee finds (i) that more data should be collected to increase insight into the amounts of taxes that multinationals pay, (ii) the Netherlands should broaden its tax base unilaterally and (iii) that international cooperation is the best way to a well-functioning international tax system. The report is currently under review of the Dutch State Secretary of Finance. In this Tax Alert, we summarize the key features of this report.

The Committee identifies several problem areas that in, their opinion, contribute to an ‘unbalanced’ payment of taxes by multinationals. The Committee therefore recommends a ‘basic package’ with seven measures that should make the Dutch corporate income tax (‘CIT’) system more fair, whilst the Dutch business climate remains attractive. While the revenues of this basic package are still uncertain, the Committee estimates an additional EUR 600 million of revenue per year.

The measures proposed by the Committee aim to achieve two objectives: (i) creating a minimum Dutch CIT base for profitable Dutch businesses and (ii) the elimination of mismatches between the Dutch tax system and the tax system of other jurisdictions.

Currently it is possible that businesses with profitable activities in the Netherlands do not pay taxes in the Netherlands. This often is due to the possibility to utilize losses from prior years that are available for carry forward.1 To make sure that businesses pay Dutch CIT once they make profits in the Netherlands, the Committee proposes to restrict the set-off of net operating losses in a given tax year to a maximum of 50% of the taxable profits in such year. This would be combined with an unlimited period of carry forward of losses and a threshold of EUR 1 million. As a consequence of the threshold, the first EUR 1 million of taxable profit may annually be off set in full against available tax losses. Similar limitations are proposed relating to other deductible expenses, such as shareholder costs and (subject to further review) royalties. The second objective is to prevent multinationals from benefiting from differences between tax systems of different jurisdictions, as a consequence of which they lower their tax burden. We refer to the table below showing the proposed measures in the basic package.

* As a result of the threshold of EUR 1 million, the first EUR 1 million of taxable profit may annually be off set in full against available tax losses.
** As a result of this measure, the deduction of payments of interest (e.g. based on the existing earnings-stripping rule), shareholder costs (A2) and (possibly, after further investigation) royalties (A3) would be limited not only separately, but also as an overall total.
*** CFC stands for Controlled Foreign Company.
**** In a letter to the Dutch Lower House of Parliament dated 23 February 2018, the State Secretary of Finance announced that he would investigate whether the Dutch arm’s length principle needed changing, specifically because the unilateral downward transfer pricing adjustment of the taxable profit in the Netherlands is not always related to a corresponding upward adjustment of the taxable profit in other jurisdictions. The outcome of this investigation is expected this year. 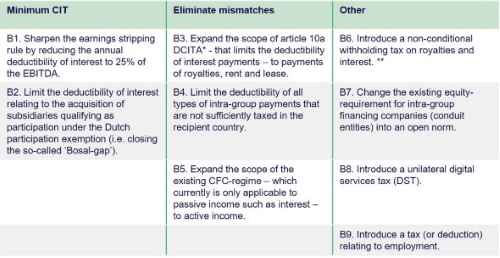 *Dutch Corporate Income Tax Act 1969 (Wet op de vennootschapsbelasting 1969).
**As of 2021, a conditional withholding tax will apply on interest and royalty payments to low tax jurisdictions (as set out in the list referred to in article 1.2, paragraph 1, sub e of the Dutch Withholding Tax Act 2021 (Wet bronbelasting 2021)). The proposed measure implies a non-conditional withholding tax, which means that withholding tax on interest and royalty payments would generally be due, unless the EU Interest and Royalty Directive or a tax treaty limits such taxation. Implementation of such a tax levy could also affect business driven (non-artificial) situations.

To counterbalance the previous measures, the Committee also proposed some compensating measures which are included in the table below. 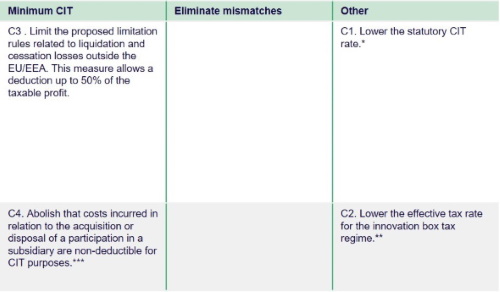 The Committee recommends the Netherlands to work more closely together with other jurisdictions to avoid undesirable strategic behavior from multinationals. After all, the Committee finds international cooperation the best way to a well-functioning international tax system. The Netherlands must in their opinion show that it is fully supportive when working out international arrangements (e.g. for a consolidated tax base (potentially within the EU)), by aiming at allocation rules that cannot be manipulated, by introducing a minimum tax rate and by limiting the preferential treatment of debt.

The Committee acknowledges that there is no full picture of the taxes paid by multinationals. This is due to confidentiality and the fact that over the past few years a large number of tax measures have been implemented in the Dutch CITA and the effect of these measurements is still unknown. The Committee argues therefore for more research and additional possibilities regarding the collection of company data.

The recommendations made by the Committee are based on the economic situation prior to the COVID-19 crisis. In the media, the Committee chairman said that he is aware that the global economy is currently in a very difficult phase, but states that in tough economic times like these, it is important that not one group of businesses has more opportunities to reduce their tax burden than others. According to the chairman, this makes the Committee’s analysis and vision on fairer taxation without compromising the Dutch business climate even more relevant.

The Dutch State Secretary of Finance has now presented the report of the Committee to the Dutch Lower House of Parliament and stated in the accompanying cover letter that he will review the recommendations of the Committee. The Dutch State Secretary of Finance expects to provide the Lower House of Parliament in the course of the summer of 2020 with a policy response.

More about the coronavirus

1. We note that as from 2019 the utilization of losses has already been restricted due to the limitation of the carry forward period from nine years to six years.

Stay current with our latest insights